The planning of the Bahraini Naval Forces: original map and organizational chart

Unique hand-drawn chart of Bahrain's naval force as it was projected in the early and mid-1970s, including two large maps: firstly, of the island's location in the Gulf showing the Navy's planned 200-mile range as well as strategic points throughout the Gulf, and secondly, a smaller scale map showing the defensive coastal artillery firing range and radar ranges reaching out to the north and east of Qal'at al-Bahrain, Galali, and East Sitra bases around Manamah. An inset flowchart shows in detail the organization of Bahrain's Navy, to be headed by the Commander of Naval Forces, presiding over the branches of Supplies and Exercises (Engineers, Supplies, Medical Office), of Operations, Planning, and Signals (all commanded by the Chief of Staff), as well as the Naval Armed Forces proper (Fleet, Special Forces, and Coastal Artillery). The extensive annotation describes the maritime theatre of war around Bahrain, identifies vital targets (Port Sulayman, oil terminal, national airport, oil wells and storage tanks, refinery) and crucial points to be observed, and sketches the projected scope of the navy: initially a small fleet of armoured motor vessels with radar-guided automatic ordnance, later to be upgraded with surface-to-surface rocket launchers with a tactical range of ca. 180 nautical miles. The planning stage is to encompass some 2 to 3 months, followed by a development stage of about 3 years and an implementation phase of another year.

The chart is accompanied by a set of nine original mid-1970s photographs of members of the Egyptian General Staff who assumedly were closely involved in advising the government of Bahrain on the structure and implementation of their new Naval Forces, which became fully operational in 1979.

A fine survival, undocumented and at the time undoubtedly a closely guarded military secret. 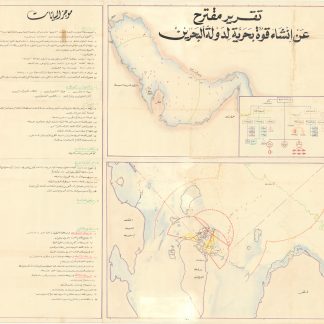