Jeffries, David. A treatise on diamonds and pearls. In which their importance is considered; and plain rules are exhibited for ascertaining the value of both. The fourth edition, with large improvements.

A 19th century edition of the "first book in English to describe how diamonds and pearls can be evaluated on the basis of the factors of size (or weight) and style of cut" (Sinkankas). The London jeweller Jeffries is also the first author to provide "a clear statement of the principle that the value of pearls should be calculated to the square of their weight [...] This principle is implicit in the valuation tables given by earlier authors, including Tavernier and others, but Jeffries is the first to state it explicitly. At the back of his book, he provides tables allowing the calculation of the value of individual and batches of pearls of different size or quality. This is effectively a 'chau' book, as used by merchants in the Gulf and India until the mid-20th century, and fulfils exactly the same function" (Carter).

Insignificant browning. Removed from the Library of the Birmingham Assay Office, one of the four assay offices in the United Kingdom, with their library stamp to the flyleaf. 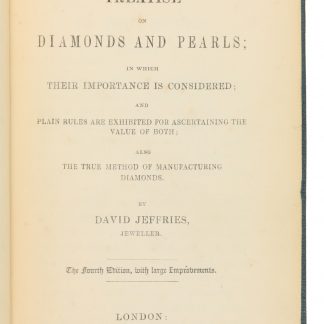 Sie sehen: Jeffries, David. A treatise on diamonds and pearls. In which their importance is considered; …London, 1871. € 1.800,00
In den Warenkorb