The Middle East before the Six-Day War

A medium-sized wall map showing the Middle East between the Suez Crisis and the Six-Day War, covering the area from the Eastern Mediterranean to Iran including most of Turkey as well as Israel, Lebanon, Syria, Jordan, Iraq, Northern Saudi Arabia and the Gulf as far south as Qatar. Oil production capacities are shown in barrels, with oilfields, refineries, pipelines, and associated infrastructure indicated on the map. The massive 'tapline' is seen crossing the northern Saudi desert from the Gulf coast to Sidon, while double pipelines run from Kirkuk to Tripoli and to Haifa. From the atlas of Yediot Achronot.

After the Suez Crisis and its associated geopolitical shifts, Britain and France were forced by the USA to abandon their post-imperial plans, and Israel now counted in both U.S. and Soviet plans for their control of Middle Eastern politics. Britain was forced to anchor its Middle Eastern influence in Cyprus, Aden and Iraq, while the increased American influence is evident in the vast Aramco oilfields at Ras Tanura. 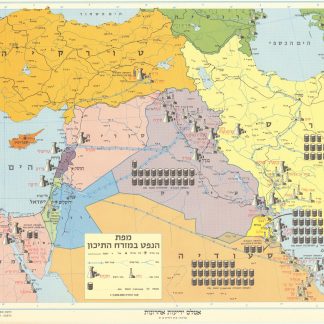