The book that brought Beethoven to China: one of 40 deluxe copies of the original edition

Signed first edition of Rolland's biography of Beethoven, a work that contributed much to shaping the 20th century's image of the great composer - notably in China, where the version prepared from 1931 onwards by Fu Lei (1908-66) and published in 1942 (as "Beiduofen de zuo pin ji qi jing shen") enjoyed widespread popularity. Beethoven's philosophy, creative genius, and capacity to surmount his suffering were examples that spoke to the spirit of the nation and invited self-identification throughout the tumultuous history of China in the 20th century. Labelled a rightist during the Cultural Revolution, Fu Lei is today remembered as the country's most respected translator of French literature, and his revised translation of Rolland's Beethoven biography remains required reading at Chinese middle schools.

One of 40 copies printed on Imperial Japanese paper, numbered "30" and signed by the author on the half-title of the first volume. Includes an extra 24-leaf suite of woodcuts on China paper at the end of the second volume. Inscribed to Victor Duhamel by Rolland on a separate sheet, dated January 1938; accompanied by a note by the publisher (and dedicatee), René Arcos. 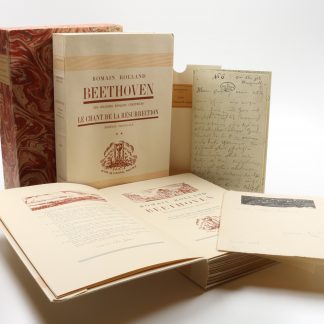