4to. (73), (1 blank) ff. With woodcut allegorical and architectural title-page with putti and mythological women holding drapes hanging from an arch and the Royal Portuguese coat of arms at the foot, 40 woodcut (geometrical and optical) figures in text, Rodericus's large full-page emblematic woodcut printer's device (a dragon with the motto "Salus vitae" on a banderole) and many woodcut initials. Bound in a period-style Italian calf binding, gold-tooled spine, blind-tooled frames on front and back boards and gold-tooled centerpieces on the front and back board with "Petri Nonii" on the front board and "MDXLII" on the back board.

First edition of two of the most important and rarest scientific works on twilight and optics. The first is written by the greatest Portuguese mathematician Pedro Nunez (1492-1577), who served as cosmographer royal to the court of João III. His "De crepusculis" discusses new solutions for problems concerning twilight (such as the shortest twilight period) and the refraction of light, and announces his new instrument for measuring exceedingly small angles, now called a “nonius”.

The second work, also entitled "De crepusculis", was written (according to the title-page) by the greatest Islamic physicist Ibn Al-Haytham (965-1039), from living in the Arabian Peninsula, whose seminal work on optics broke with ancient Greek theories. In fact, the work is now attributed to the great Andalusian father of spherical trigonometry, the 11th-century mathematician and astronomer Abu ‘Abd Allah Muhammad ibn Mu’adh, who was described by Averroës as “advanced and high-ranking” (Sabra, p. 85), but about whom very little is known. His work discusses the density of the atmosphere and establishes a relationship between atmospheric pressure and altitude. It also notes that twilight only ceases or begins when the sun reaches 19 degrees below the horizon. It was translated from Arabic into Latin by Gerard de Cremona (1114-87), who brought Arabic science to the West. This work is one of the artifacts through which Islamic civilisation made significant and crucial contributions to scientific knowledge in the pre-modern age during their golden age of Arabic science, although the Latin translations in this field only provide “a dim reflection of the true splendour of achievements” (Gerli, p. 804).

With an owner's inscription at the head of the title-page and a handwritten impressum on the title-page in the same hand, three faint library stamps (two of a library in Douai) and with marks of an erased bookplate on the front pastedown. Binding very slightly worn around the spine, some small stains on the endpapers, but otherwise a beautiful copy in very good condition. 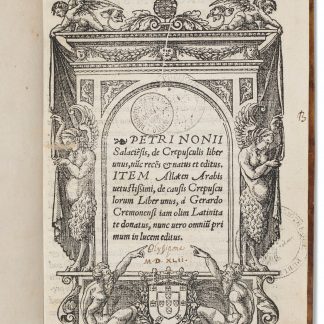