4to and oblong 8vo. Altogether 21 pp. With 3 autograph envelopes. Includes two typed letters by Jung's assistant Aniela Jaffé, the draft for a letter from Leonore L. Fabisch, and a hectographed letter of recommendation by Jung (together 4 pp. 4to and oblong 8vo).

Important, hitherto unpublished German correspondence with the graphologist and psychologist Leonore L. Fabisch, who briefly studied under Jung and had fled from Berlin to New York in the 1930s. Encompassing the years from 1940 to 1960, shortly before Jung's death, the letters cover a broad range of professional subjects and biographical events, giving evidence of a long but complicated friendship. Some of the early letters from the war and its immediate aftermath strike a melancholy tone, especially the second one, dated 2 April 1941, in which Jung complains that he seems unable to write anything meaningful and dreads answering the many letters he receives. He briefly refers to antisemitism, cautiously confirming Fabisch's suspicions that this might prove a hindrance to her establishing herself professionally in New York: "You are right, the Jew and antisemitism are a big problem. I suppose something of this sort must exist, it wouldn't be so otherwise". Jung goes on to condemn the entire world as "largely a rotten mess" ("grösstenteils eine Schweinerei") only barely good enough to survive, perpetually on the brink of "croaking on all its wickedness". All things considered, he writes, human existence is about "eating or being eaten", and those who have "a roof over their heads, enough to eat and a one or two decent acquaintances" have already reached a "so-called state of happiness" - anything beyond that is "a luxury and treacherous luck". Fabisch ought to be grateful every day for "not being in Germany or anywhere else in Europe any longer". The ambiguity of Jungs's short remark about antisemitism and its subtle relativization fit the pattern of his widely criticized statements during the rise of Nazism and his psychological characterizations of "Germans" and "Jews" from the late 1930s. While Jung was never considered an antisemite, his remarks were often felt to be naive, and he later felt it necessary to apologize to several Jewish friends.

His bitter, insensitive letter to Fabisch may have contributed to the four-year hiatus in the correspondence to which Jung refers in a subsequent letter of 4 August 1945, stating that he has reduced his psychological practice to a minimum for the benefit of his scientific projects. Jung also announces the 1946 publication of "Psychology of the Transference" and hints at "Mysterium Coniuctionis", which would not appear until 1955. In both publications Jung tries to establish a connection between psychology and alchemy, a subject which recurs in a letter from 1 April 1955. While Jung shows more empathy with Fabisch's struggles as an immigrant in New York after the war, he paints a grim picture of postwar Europe: "I understand that you never feel quite at home in America, even though Europe has been turned into a hellscape thanks to the Germans' madness" (3 August 1946). In his view, Switzerland has been "miraculously spared" but has become a "cultural island" and a "small piece of old European culture", for "the situation is worse than after the Thirty Years' War".

Referring to his fragile health and old age on several occasions, Jung regrets that he does not have the energy to visit Fabisch in New York but hopes to welcome her in Europe. Fabisch's first visit to Switzerland after the war seems to have occurred in July or August 1949, with a second one in 1953. A potential third visit was overshadowed by the death of Jung's wife Emma in November 1955.

On 14 December 1955, Jung's assistant Aniela Jaffé thanks Fabisch in Jung's name for a letter of condolence, emphasizing that it was one of the few he had read personally. In early 1956 Jaffé confirms the possibility of a visit in June but writes that Jung now lives in semi-seclusion and cannot spare "as much time as you wish and possibly need". The enigmatic phrasing and Jung's avoidance of writing personally points to a complication in the relationship with Fabisch that a typed letter from 4 June 1954 had anticipated: "The difficulty that you experience in your relationship to me is illuminated by your dream. It speaks of an entitlement that is not in agreement with my reality. Even within the dream there is a remarkable disconnection to the external situation, as you lightheartedly indulge in sleep without the least consideration for me, your surroundings, or their situation. It would seem to me quite understandable that no relationship can be formed under these circumstances". Overall, the correspondence remains professional and friendly. In the same letter, Jung interprets the dream of one of Fabisch's patients: "I have never seen this symbolism before. It appears to imply that the sexual act is elevated from the sphere of mere drive, where it resides, to the psychological sphere". He also encourages Fabisch to publish her cases and thanks her on several occasions for books and birthday wishes she had sent him. When Jung and Fabisch discuss her plan to relocate Brazil, he seems on the verge of repeating his earlier insensitive remarks, noting that while from Zurich the move seems gigantic, Fabisch has, after all, "already uprooted herself once and may as well continue the routine", at the same time warning her that Brazil "lags far behind Chicago, on the very border of the jungle," and has "strange spirits in the atmosphere, but no spirit". He advises her to go to New England instead (5 December 1958). Two years later, in a letter from 4 August 1960, after Fabisch has in fact decided to move to Sao Paulo, he strikes a new tone: "After all, that place is also on earth and consists of human beings". In contrast to his letter written in 1941, Jung here appears once more capable of a cautiously positive assessment of humanity.

One of the manuscripts is a diagram of a tarot reading by Jung for Leonore L. Fabisch in black ink, pencil and red pencil, dated 11 August 1949. The second manuscript might be the attachment with transcriptions of an inscription sent with a letter from 1 April 1955, wherein Jung discusses an alchemical image. It comprises 7 lines with two Greek quotes referring to the gods Aion and Telesphorus and a German translation by Jung. The first quote is attributed to Heraclitus.

With two exceptions on stationery with printed address. Overall in very good condition with occasional creases and minor tears and a few deeper tears (24 April 1940, 19 April 1949) but no loss to text. 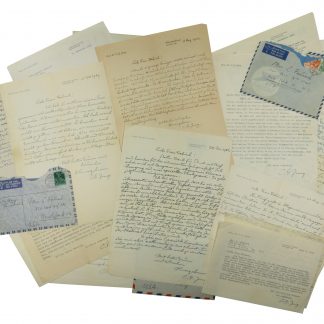