"Secret" and "Confidential": The making of the most famous map of Arabia

This letterbook containing correspondence on the research and preparation for F. F. Hunter's "Map of Arabia and the Persian Gulf" (1908) forms an important source that reveals the extensive and detailed work behind the production of a milestone in the mapping of the Arabian Peninsula.

When Hunter joined the Survey of India from the Indian Army in 1905, he was ordered to produce an up-to-date map of Arabia. Hunter was well connected with the political agents and intelligence officers who were at this time highly active gathering new information about a region that was of ever-increasing strategic significance. As this volume of correspondence reveals, reports and maps coming from this intelligence network provided much new topographical detail for his map. The series of letters by Captain Maurice O'Connor Tandy (1912-86), a key collaborator with extensive experience in the region, is particularly revealing in providing analysis of topographical details obtained from travellers and spies.

Principal correspondents include Col. Francis Becon Longe, Surveyor-General of India, including his letter of appointment ("I want you to compile a map of Arabia & the Persian gulf - in conjunction with Capt Tandy & Mr Lorimer of the Foreign Dept, Capt. Tandy will put you all right professionally & Lorimer will give you all the information. It is strictly confidential [...]", 7 Aug. 1905); other senior members of the Survey of India such as T. F. B. Renny-Tailyour, S. G. Burrard, and W. J. Bythell; but also the Intelligence Branch, the Imperial Library, and representatives of the Indian Foreign Office, Simla ("A great deal of fresh detail of the Arabian Coast in the Persian Gulf from Kuwait to Sazwa Bay including the Country inland [...] has recently been received which shows great alterations & additions to existing maps to be necessary", Hunter writes to the Assistant Surveyor General, Simla, on 4 Jan. 1906).

There is an extensive series of lively correspondence with Capt. Tandy, for example discussing the explorer and political agent G. W. Bury: "he also undertook two journeys into the interior during which he made the map in 21 sheets, he went disguised as an Arab & is confident that no one suspected that he was anything else, when we were up country however we met chiefs from the districts he had visited & they assured us that they knew all the time that he was a Christian" (15 June 1906).

Another extensive series of more than 50 letters and telegrams from John G. Lorimer focuses on the progress of the project and a controversy over the transliteration of names ("The chief changes from my system are the use of Q instead of K in some cases, the showing of final H even when silent, and the omission of the vowel before or after (') where there is no vowel in Arabic", 7 July 1906), recent travels in Arabia, information supplied by political agents and others, Hunter's research including maps, charts, and other materials (many of them confidential or secret) supplied to him to produce his map, including Capt. Prideaux's "Rough map of Katar Peninsula Scale 1 inch = 4 Miles", the progress of the project including redrawing sections, decisions on typography, and related subjects.

Hunter's map was produced to accompany Lorimer's "Gazetteer of the Persian Gulf", and the two men worked very closely together, meaning that the letters from Lorimer in the current volume give particular insight into the progress of the map-making project. Hunter later reminisced on their time together: "Mr Lorimer, the draughtsman, and myself spent the winter of 1905-6 in the Foreign Office at Simla - a building designed for summer use. We worked from ten to fourteen hours a day, often in overcoats and mittens, with our ink constantly freezing: good draughtsmanship was difficult" (Hunter, "Reminiscences of the Map of Arabia and the Persian Gulf", GJ 54 [1919], p. 356). The disagreements over transliteration delayed publication, but also gave an opportunity to redraw and improve the map, which was finally published in 1908 but, given its use of intelligence sources, was given a "Secret" classification. 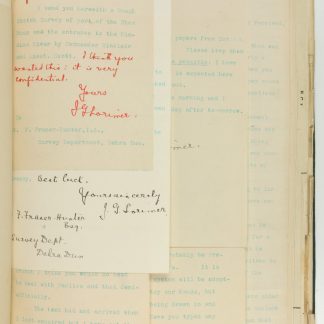