Second, improved Latin edition of this famous account of a pilgrimage to the Holy Land by the Polish Prince Mikolaj Krzysztof Radziwill (1549-1616), frequently translated and reprinted. First published in 1601; the present edition is corrected and expanded.

During his two-year journey from 1582 to 1584 Radziwill visited not only Palestine, but also Syria, Egypt, Crete, Cyprus, Italy and Greece. "Radziwill, in his account of the pilgrimage to the Holy Land and Egypt, described the ethnic diversity of the inhabitants of these lands. Critics underline the fact that his descriptions were ethnographic in character and quite objective. His 'Peregrynacja' was published in Latin and in Polish and apparently was quite widely read" (S. Grodz, Islam in Polish-Lithuanian/Ottoman Encounters, in: The Character of Christian-Muslim Encounter, Leiden 2015, p. 234).

The emblematic illustrations show sailboats in a fierce storm, such as Radziwill himself encountered, as well as appropriate Biblical quotations in banners decorated with maritime elements, but also a plan of the Church of the Holy Sepulchre in Jerusalem (a separate appendix describes the prayers and songs there to be sung).

Binding somewhat brownstained and a little warped; upper hinge starting. Paper evenly browned throughout, occasional brownstains. Provenance: from the library of Duke Franciszek Maksymilian Ossolinski (1676-1756), Polish politician in the service of the exiled Stanislaus I. Leszczynski and an important collector, with his autograph ownership inscription "Ex Libris F. M. Ducis de Tencryn-Ossolinski", dated Lunéville, 12 Sept. 1741, to front pastedown, and a three-line handwritten French quotation from St. Augustine to lower pastedown. In all a good copy of a widely received work; this edition rarely seen at auction. 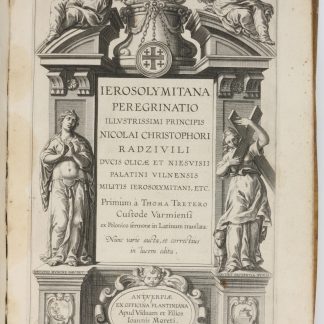