9 original gelatin silver photographs laid down on thick cream card (likely removed from an album), each measuring approx. 92 by 138 mm. Three captioned and/or numbered in the negative.

Rare photographs of Muscat depicting variously, "The Rock of Muscat", the Al-Jalali Fort, and the Al-Mirani Fort. A number of the images are of a military nature, from which it is possible to surmise that the photographer was an officer: a torpedo being fired, a significant cache of weapons and troops (bluejackets) disembarking on the shore to be greeted by a crowd of civilians. Such scenes reflect the British presence in the Gulf of Oman at the time, where they were engaged in combatting the East African slave trade, suppressing the smuggling of arms and generally attempting to exert influence whenever possible.

Some marginal fading, otherwise very good. Original photographs of Muscat from this era are exceedingly rare, especially in this condition. The best-known examples were taken by the professional photographer A. R. Fernandez, but the present set certainly represents an amateur effort, and these are likely to be the only surviving prints of the images. 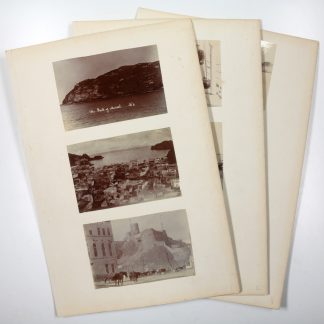