The first complete New Testament printed by the BFBS entirely in Syriac, edited by Samuel Lee. "The editor based his text upon Schaaf's edition; but he collated an ancient Syriac MS. belonging to Adam Clarke, a MS. from the Lebanon, dated 1523, now at Cambridge, and a third MS. (without vowel-points) brought by Claudius Buchanan from Travancore, as well as the Commentaries of Ephrem Syrus, and also made some use of the collations of R. Jones. The printing of this edition was completed in 1816" (Darlow/M.). This copy has the "extensive obliterations [...] in the section headings, made by means of a stamp and violet ink", which were "made by order of the BFBS Committee, on the ground that the headings contravened the rules of the Society" (ibid.).

Binding rubbed and bumped; occasional marginal scribblings in red crayon (more extensive on p. 5). Traces of worming in the upper margin of the final two leaves overpasted with brown paper. In all a good copy of a rarely seen edition. 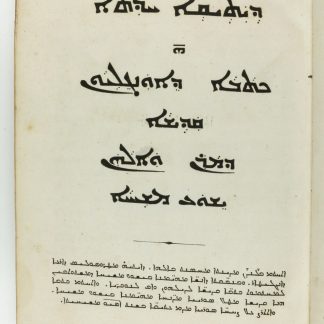