To the English novelist Catherine Hutton (1756-1846) in Birmingham about his plans for the Thames Tunnel: "At the Meeting of the Direction of the Thames Tunnel yesterday it was understood that my Plans & Models of the Design for completing that work should be submitted to some eminent Engineer, and upon his approval of the principle of my new method of tunneling the Directors are to submit it with their recommendation to the General Assembly of the Proprietors, when it will be regularly put to the Vote whether the work is to remain as it is, or whether it shall be completed under the directions of, Dear Madam, Yours very faithfully [...]".

Best known as a railway engineer, Vignoles had in 1826 been offered a post by Marc Brunel as resident engineer for the Thames Tunnel, but this was to be withdrawn in favour of his son Isambard Kingdom Brunel.

With 3 small strips of old mounting tape on verso. A newspaper clipping showing a cross section of the tunnel with Brunel's famous tunnelling shield, as well as an engraved portrait of the engineer with his facsimile signature, are enclosed. 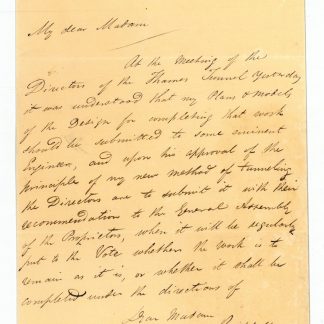