4to. 1½ pp. on bifolium. With autograph address verso.

To Mr. Strong in London returning several deeds (not enclosed), with suggestions to staff the Birmingham and Shrewsbury commission: "Having been in Leicestershire for some time I had not the favor of your two last Letters till Monday evening and now take the first opportunity to return your Deed of the 6 & 7 of August 1762. The Indenture of the 26 June 1778 with the Receipt for the Consideration Money. The Deeds of Lease & Release of the 19 & 20 of April 1780. And the Original Copies of Court Roll to be examined at Salop with the Court Roll. And as you observe that there need be but one Commission for Birmingham and Shrewsbury in case Mr. Richard Heast attends at Salop, I think it best to name him a Commissioner with Mr. Richard Slaney of Shiffnal Attorney at Law, Mr. Crees of Wolverhampton Do., Mr. Demberton of Salop Do. and in case another should be required Mr. Derkes of Sareshall near Wolverhampton, might be named. As to the Wiltshire Commission I leave it entirely to you to name a fourth Person with Mess. Still and yourself. I shall be very glad to see you here when you come into the Country [...]".

With a list of names of the commissions' staff to page III of the bifolium, probably in the recipient's hand. Small marginal flaws, most prominent along the centerfold. 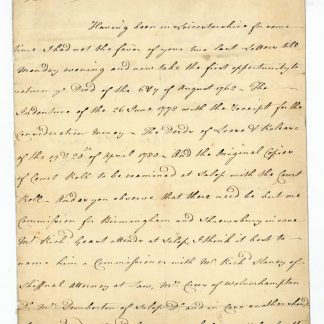