Luxuriously bound Turkish New Testament, newly translated from the Greek by the German-born William Gottlieb Schauffler (1798-1883). This is the first Constantinople-printed complete New Testament in Osmanli Turkish ever printed in Arabic characters: previous editions had been printed in Greek or Armenian characters only.

"Ordained a missionary [..., Schauffler] reached Constantinople in 1833. His linguistic gifts and missionary experience fitted him for translation-work [...] In 1858 the British and Foreign Bible Society commissioned him to transcribe into Arabic character W. Goodell's Armeno-Turkish version of the Bible, slightly adapting it to meet the needs of the Moslems. When this proved impracticable, he was authorised to make an independent version in simple, idiomatic Osmanli" (Darlow/M., p. 1641).

This copy was bought in Constantinople on 9 August 1879 by J. Gies for 25 silver piastres, as noted by the collector in ink on the title-page. Later in the library of by Karl Schäffeler (his ownership, dated 20 Sept. 1927, on the flyleaf and his bibliographical note on the pastedown). 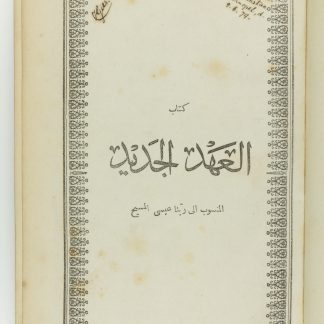