4to (180 × 240 mm). Arabic manuscript on cream paper. Two books, each with 10 chapters or Maqalahs, bound in one volume. (614) leaves, lacking one leaf from Book 2 (Maqalah 8, Bab 23) and another leaf from Book 2 (Maqalah 10, Bab 23) replaced in 19th century manuscript facsimile. 21 lines, per extensum, written in black naskh, chapter headings and important sections in red, catchwords throughout, each of the 20 chapters with an index of the ‘bab’ within and each with a separate colophon. Later brown lacquered leather over pasteboards, faintly pressed central medallions to covers, rebacked.

One of the few existing complete copies of this medical milestone. Exceptionally rare: a fundamental medical work from the Golden Age of Islamic scholarship, preceding and influencing Avicenna's Qanun. Monumentally influential not only in Islamic medicine, this work even had profound impact in the West. It was first translated into Latin by Constantinus Africanus in the 11th century for use as a primary text at Salerno's medical school, and then again in 1127 by Stephen of Antioch. By the 14th century knowledge of the work was so widespread that Al-Majusi is mentioned as one of antiquity's great medical scholars in Chaucer's Canterbury Tales. 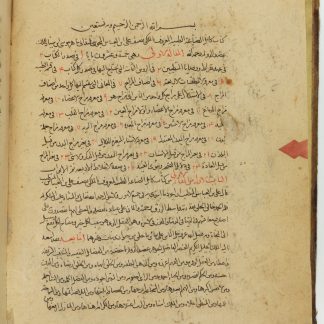