Beautiful musical quotation that points to an early stage of the composition of "La Damnation de Faust", given that Berlioz renamed the "Introduction Pastorale" as "Le vieil hiver fait place au printemps" ahead of the premiere in 1846. The quotation of the andante in D major comprises 8 bars of the viola score, 7 bars of the clarinet and flute score, and 4 bars of the second violin score.

According to his "Mémoires", Berlioz composed the introduction on his way to Vienna "at an inn in Passau on the Bavarian border" (chapter 54), a journey that can be dated to late 1845. Deeply disappointed by the poor reception of his 'Faust' upon its premiere at the Opéra-Comique on 6 Dec. 1846, Berlioz writes in the same chapter: "Nothing in my artistic career has hurt me more deeply than this unexpected indifference". Berlioz did not live to see the enduring success of his innovative work after its rediscovery and popularization by the conductor Édouard Colonne in the last quarter of the century.

With collector's note in ink. Some foxing and browning; a few tears have been restored by mounting the paper on cardboard. 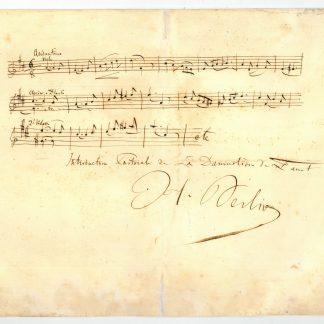