"The poor Capuchin friars have petitioned us": The Duchy of Milan in the aftermath of the Italian Wars

Folio and 4to. Altogether 6 pp. Together with an original copy of one of the documents and three petitions to the governor.

Collection of documents from Gonzalo II Fernández de Córdoba's two terms as Spanish governor of the Duchy of Milan (1558-59 and 1561-64), including a letter to Philip II of Spain and a letter to Emmanuel Philibert, Duke of Savoy.

The earliest document in the collection is the letter to the Duke of Savoy on behalf of a military captain named Gulielmo Prato, recommending him to the Duke's favour as the French "confiscated his properties" during the Italian War of 1551-59. Emmanuel Philibert had commanded a Spanish-Savoyan army in the decisive victory against the French in the Battle of St. Quentin (1557), which paved the way for the restoration of the Duchy of Savoy. Written in Genoa, the letter is dated to 26 January 1558 and thus slightly predates Fernández de Córdoba's rule in Milan. He was probably travelling from his native Grenada to Milan via Genoa, following his appointment as governor.

The letter to King Philip II is a recommendation of Gulielmo Prato's father Andrea, castellan of Serravalle, who "has served his Majesty many years in the wars" (Milan, 31 May 1559). The fortified town in question is probably Serravalle Scrivia in the modern Piedmont region, then an imperial fiefdom held by the Genoese Spinola family.

A document signed in Borgo San Marino on 23 October 1558 confirms that Count Giovanni Angosola is the creditor of a loan based on his salary as captain of a company that was to be used to "pay at least 200 scudi of the condemnation of 500 scudi newly issued against Certi di Giussanno", probably one of his soldiers.

Some two months later, Fernández de Córdoba issued a document ordering his magistrates to provide the Capuchin friars of "Alessandria, Abiategrasso, Monza, and Herba" with salt as an act of charity. The original petition, a list of the four towns in question, and a copy of the order with a different signature are enclosed with this interesting document.

In early 1559, Fernández de Córdoba ordered his magistrates to compensate "various poor and friars of the city of Tortona" whose houses had been razed during fortification works (Milan, 22 January 1559). The original petition on behalf of the poor is enclosed.

A document from 13 June 1559 concerns the adjustment of salt prices and the salt tax in Cremona, granting the local nobility reductions.

A similar problem occured in 1563, when a congregation of Dominican friars in the parish of Bellagio on Lake Como requested to receive salt "at the price that is extended to the other religious places". The governor sends the original petition, naming beneficiaries of the reduced price as legal precedent, and asks his magistrate for his opinion before he makes a decision (Milan, 13 March 1563).

Two related documents from June and July of 1563 are the most recent of the collection. They concern the fulfilment of a five-year contract ("capitolatione") between the Spanish crown and the Genoese banker Leonardo Spinola relative to the renewal of the artillery in the Milanese fortifications, the so-called Castello Sforzesco. Leonardo Spinola, not apparently related to the powerful Genoese family of the same name, came to Milan in 1550 as an associate of the banker Tommaso Marino. Today he is chiefly remembered for the construction of Palazzo Spinola in Milan, starting in 1570.

Gonzalo II Fernández de Córdoba, 3rd duke of Sessa, was the maternal grandson and heir of the important general and statesman Gonzalo Fernández de Córdoba (1520-78), who had been instrumental in the Conquest of Grenada and later served as Viceroy of Naples. After the untimely death of his parents, Gonzalo received a humanist education in Grenada. As a grandee of Spain he joined the court of Charles V at a young age, accompanying the Emperor in Naples and Rome upon his return from the Conquest of Tunis (1535). In 1548 Gonzalo was part of the retinue of the future king Philip II, accompanying him in Flanders, Milan, and England. As King of Spain, Philip II made Gonzalo his governor of Milan in 1558.

All documents with papered seals and autograph addresses. All but one document annotated and all but the letters to Philip II and Emmanuel Philibert counter-signed twice. Occasional browning and minor tears. The two orders concerning Leonardo Spinola show several deeper tears to the left border and stronger browning. Some words affected by paper damage (Milan, 2 June 1563). The letter to Emmanuel Philibert cut to the lower border, affecting the signature of the governor. 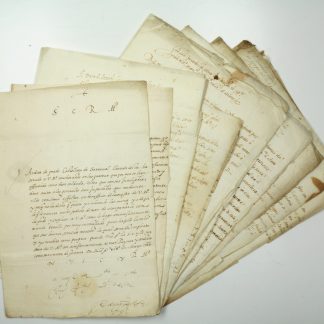