To Heinrich Mann, proposing he meet Mimi Ederer, who - according to Werfel - has read and admires Mann's books and would like to meet him in person. The letter dates from the last day of 1916, while Werfel was on a short leave in Prague ("nur auf kurzen Urlaub in Europa") during his war service on the Russian front.

Werfel's first book of poems was published in 1911, and soon after that he became member of the Prague circle of German-speaking Jewish writers, whose members included Franz Kafka, Max Brod, and Egon Erwin Kisch. In 1912 Werfel moved to Germany, where he established friendships with the most eminent German-speaking writers and intellectuals; his relationship to Heinrich Mann probably also dates from this point. During World War I he served as telephone operator in the Austro-Hungarian army on the Russian front. After the War he settled in Vienna, where published his novels and became one of the most prominent and best-selling authors of his time. His masterpiece "The Forty Days of Musa Dagh" appeared in 1933, based on the true events of the Armenian Genocide by the Turks during World War I. After the "Anschluss", the German annexation of Austria in 1938, he was forced into exile, first to France and finally across the Pyrenees and to the United States, together with Heinrich Mann and other refugees. He died in Los Angeles in 1945.

Mimi Ederer is mentioned in Grete Fischer's autobiography as her handsome classmate in secondary school in Prague. Grete Fischer (1893-1977) was an emigré writer in the UK, and during her early years in Prage was a close friend of Franz Werfel and Egon Erwin Kisch (the latter also knew Mimi Ederer and mentions her in his correspondence with his family). 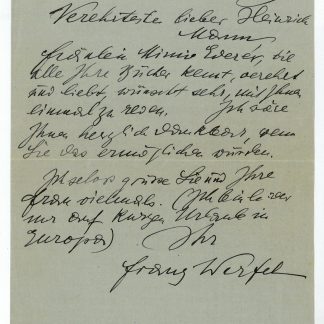