One of Jolivet's first major works, which remained unpublished until 1989 (Salabert), described by the French violinist and leading interpreter of Jolivet's works, Devy Elrih (1928-2012), as "embracing a new musical language, and a reinvention of notation for violin and piano, as well as the relation of the two". Elrih goes on to characterize the composer's intention to "express himself free of any references to earlier works in this domain [...] as a 27-year-old man, full of life, lyricism and determination".

The sonata, with a duration of 13 to 15 minutes (as noted by Jolivet at the head of the manuscript), comprises three movements: "Ramassé", "Librement", and "Bousculé". The first movement also appears in the prelude of the 1930 work "Prélude et Grave pour violon et piano", revised in 1932 (K 44). Following the first movement (pp. 1-12), the second movement (pp. 13-17) was crossed out in crayon, page 13 bearing the note: "Refait: voir ondes, no. 1 des 3 poèmes pour ondes", referring to the 1935 composition "Trois Poèmes pour ondes Martenot et piano". The revised version of the second movement (paginated 1-5) is inserted between the first movement and the crossed-out second movement. The third movement comprises pp. 18-37. In the 15-page part for violin adjacent to the piano score, the second movment (pp. 6-7) is also crossed out. The violin part includes fingerings added in a different hand.

Analyzing the piece, the musicologist Lucie Kayas concludes that "the whole sonata produces a feeling of heterogeneity of the consecutive tonal, modal and dodecaphonic keys, as if, in contrast with the manner shown by the polytonal works of Jolivet's early youth, an idea of collage prevailed, now through juxtaposition rather than mere simultaneity".

With three stamps of the "Societé des auteurs, compositeurs & éditeurs de musique", dated 26 June 1934 (one rather faded), as well as one stamp of the "Commission d'examen des bulletins". Several corrections and annotations in crayon and pencil. Wrappers with several small flaws; spine rebacked with tape. 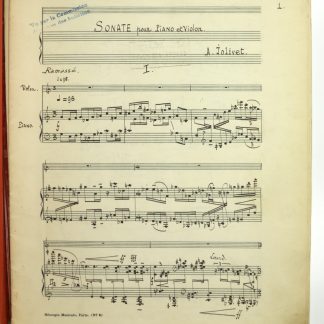