Signed and inscribed, from one left-handed pianist to another

First edition of the printed score, signed and inscribed in blue ink to upper wrapper by the dedicatee, Paul Wittgenstein, only brother of the philosopher Ludwig Wittgenstein: "To Mr Douglas Fox as a remembrance / Mai 31, 1927 / Paul Wittgenstein".

The final form of the Parergon to the Sinfonia Domestica was written in 1925 for Paul Wittgenstein, for whom Strauss also wrote his Op. 74 (Panathenäenzug). As one of the wealthiest musicians in Austria, Wittgenstein (who lost his right arm during the First World War) commissioned works for the left hand from composers that included Ravel, Prokofiev, Korngold, Franz Schmidt, Britten and Richard Strauss. Wittgenstein inscribed this particular score to the fellow one-armed pianist Douglas Fox, who also lost his right arm during the First World War (and for whom Frank Bridge wrote his Three Improvisations for the Left Hand). According to his sister Winifred Fox, her brother and Wittgenstein met in Oxford and corresponded occasionally.

Some wear and loss to spine. Together with a copy of the privately printed book "Douglas Fox" by the pianist's sister Winifred: author's copy with three annotations to the index and an autograph note written before the epilogue (dated 1979), regarding her brother's pianos and the person and establishment to whom they were left. 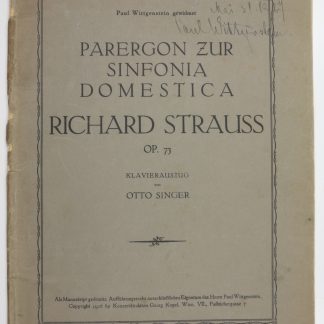