A rare photographic record of the major sites and geographic features in Saudi Arabia, Jordan, Syria, Egypt and Palestine. The images - taken for the most part by Moritz but some by Turkish friends in areas where he was prohibited from going - depict pilgrims on the Hajj to Mecca, Bedouins, the building of the Hejaz railway between Damascus and the holy cities of Mecca and Medina, Jiddah, Petra, and Mt. Sinai. Moritz (1859-1939) was an Arabist and archaeologist who from 1896 to 1911 headed the Khedival Library and Archive in Cairo. It was from there that he made numerous research trips to the Sinai and Hejaz, taking the present photographs between 1905 and 1915.

Plates and text are well preserved, with only a few occasional minor chips to the edges of the mounts. Portfolio uncommonly well preserved and only a little rubbed at the extremeties. 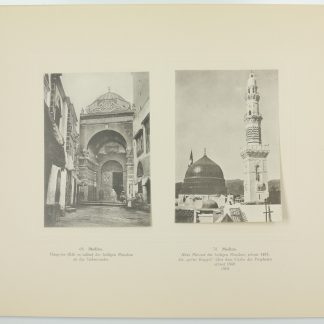