To a Mrs. Sherman in Newtonville, Massachusetts, thanking her for a letter: "Thank you indeed! Your kind letter expressed not only generous praise but generous understanding. All workers care for that very much - very much".

A beautiful autograph by the creator of "The Secret Garden" and "Little Lord Fauntleroy", written soon after her permanent return to the United States. In 1908 her house in Plandome Manor about 3.5 miles south of Sands Point was completed. 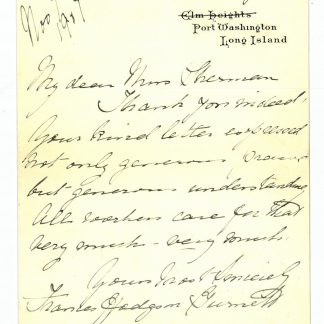