Large folio. 12 leaves (22 x 16 inches), each containing a large mounted albumen photograph (ca. 12 x 10 inches) with descriptive letterpress beneath. Original leather-backed marbled boards with gilt-lettered roan label on front cover and leaf of printed introductory text mounted to inside front board. Skilfully rebacked and recornered. Small, unobtrusive 19th century embossed library stamp at lower right blank corner of each mount, minor wear at board extremities and chipping at edge of front endpaper, else an unusually clean and nice copy, with the photographic plates in perfect condition.

An extremely rare photographic work, unrecorded in the major scholarly studies of early photography in the Holy Land.

According to the introductory text, "In the winter of 1859 the King of Prussia sent an artist to the Holy Land to procure views for his portfolio. Having reached Jerusalem, whilst the Royal commission was being executed, I was so fortunate as to secure (through the courtesy of Right Reverend Samuel Gobat, of the Anglican and Prussian mission) fine impressions from the most valuable of these negatives [...] they are now published, at the request of many persons [...]". Eccleston was an Anglican minister in Newark, New Jersey.

A gilt frame surrounds each photograph, beneath which is the title of the plate and two columns of letterpress text within a decorative type-ornament border. The titles of the plates are: Garden of Gethsemane; Damascus Gate; Jew's Waling Place; Church of Holy Sepulchre; Mosk El-Aksa / Solomon's Bridge; Valley of the Son of Hinnom; St. Stephen's Gate; Golden Gate; Top View of Jerusalem; Bethany; Via Dolorosa and Ecce Homo Arch; Mount Moriah and the Mosque of Omar.

Though seemingly unknown to scholars working in the field, two copies of Eccleston's book are indeed known: the NUC and RLIN both record one copy, at Yale, and OCLC locates a second copy at the University of Texas. Our copy was given by Eccleston, probably soon after publication, to his local library company; in the 1880s the library company was absorbed by a newly-created public library, from which it was purchased. 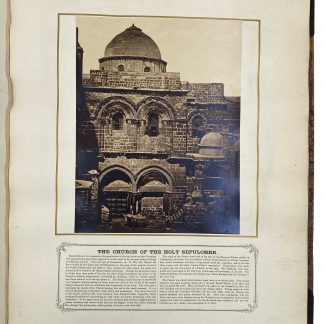