First Hebrew edition: printed in Latin and Hebrew parallel text, with some passages in the notes in Arabic. "A pretty edition, and the only one to unite the text with a Latin translation" (cf. Brunet). Two duodecimo editions, in Hebrew only and in Latin only, were also published by Elzevier that same year.

Benjamin of Tudela, the "Wandering Jew" or "Wandering Rabbi", made a particular ethnographic study of the Jewish population of the various lands he visited on his travels. Setting out from Spain around 1160, he included Greece and the Aegean Archipelago, Constantinople, Jerusalem, Damascus, Baghdad, and Alexandria in his thirteen-year peregrination. Returned from his travels, he wrote his book in 1178. "One feature of his narrative is its division into what he actually saw and what he heard" (Blackmer). In Cyprus, for instance, he is stinging in his criticism of those who are "nempe Epicurei [...] Sabbathi vesperam profanant".

A clean and well-preserved copy. 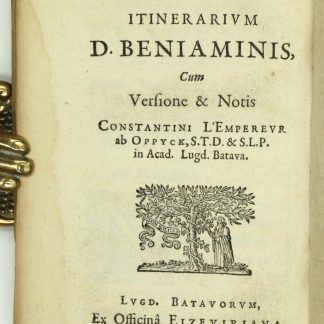