The complete 40-volume run of the "Naval Chronicle", the most influential maritime publication of its time and today a key source for British maritime and military history. Founded by the Royal Navy chaplain James Stanier Clarke and the naval officer James Stanier Clarke, the monthly periodical ran for two full decades from January, 1799 to December, 1818. It contains a wealth of information about the Royal Navy of the United Kingdom, including biographies, histories, anecdotes and news, essays on nautical subjects, as well as poems and ballads on a variety of related topics.

Several volumes include material on events in the Arabian Gulf and Sea, often recounting episodes of "piracy" against British vessels, such as the capture of the East India Company's ships "Shannon" and "Trimmer" on 1 Dec. 1804 (an account is found in vol. XV, pp. 24f.) or the Arab raid on the "Minerva" on 29 May 1809, during which the crew were massacred and the vessel converted into the Al-Qasimi flagship (reported in vol. XXIII, p. 281f.; vol. XXIV, p. 30f.). Such events provoked the British "Persian Gulf" campaign of 1809, in which a large British force was deployed to destroy Al-Qasimi bases and ships. The Battle of Ras al-Khaimah, fought on 11-13 Nov. 1809, is reflected in reports printed in vol. XXIV (pp. 73 and 363), and renewed interest in the region and its history, customs and religion prompted a lengthy article on "The Wahebite Arabs" (vol. XXIV, pp. 293ff.; 371ff.), or "the Wahebbi, whose name is much connected with the Iowassimi pirates". A decade later, the British Navy would return in another massive operation against Ras Al Khaimah, which would lead to the signing of the General Maritime Treaty of 1820 between the British and the Sheikhs of the coast which today comprises the United Arab Emirates.

Bindings variously rubbed and bumped, some quite severely with hinges split and extremeties chipped; some spines rebacked, some labels lost. Occasional brownstaining throughout, but largely confined to tissue guards and opposite pages. In all a worn but still appealingly bound set, often encountered in separate volumes only. 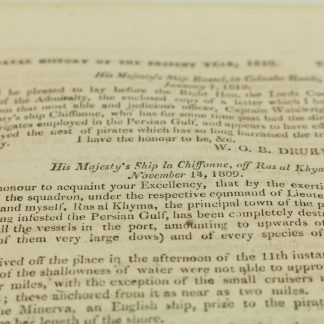