Commissioned by King Francis I for his son (who would be crowned Henry II in 1547), Desceliers' "Dauphin map" or "royal world chart" is one of the most famous of the first half of the 16th century: hand-drawn and illuminated on vellum, it vividly illustrates the discoveries made during the six decades following the discovery of the Cape of Good Hope by Bartolomeu Dias in 1488. It was compiled from information that Desceliers had obtained from the other Dieppe geographers, from the shipowner Jean Ango, and the explorer Jacques Cartier.

Remarkably, the map has a dual orientation: north of the equator, the text and illustrations are reversed, suggesting that the map was in fact meant to be laid flat rather than wall-mounted so that it could be read from all sides. Thus, the vast majority of the earth's land mass, and almost all of the better-known parts of the world, is labelled as if the map were oriented with south at the top, recalling the Arab tradition exemplified by al-Idrisi's famous 12th century map. In charting the Arabian Peninsula and the Gulf specifically, "the cartographers of Dieppe in northern France seem to have had direct access during the 1540s to relatively reliable Portuguese prototypes" (Couto et al., Historical Atlas of the Persian Gulf [Brepols 2006], p. 114), even if they appear to have had difficulty reading all the place names.

To the south of Borneo, Desceliers included not only an island labelled "Java Petite", but also, immediately adjacent, a vast mass of land named "Java la Grande" - an uncannily good representation of the northern coastline of Australia, albeit far north of its true location, which merges into the Great Southern Continent that itself stretches into Antarctica ("Non du tout descouverte"), extending as far as the Strait of Magellan. Probably drawing on Marco Polo as well as Portuguese portolans of various scales, Desceliers' representation "sums up everything cartographers knew about Australia in the mid 16th century" (Tooley, Landmarks of Mapmaking, p. 245).

In the tradition of French Renaissance portolans, the map is remarkable for the wealth of its illustrations. The seas are decorated with compass roses, ships and sea monsters, while the land is adorned with a multitude of scenes and representations of fantastic animals. It is framed in the northern hemisphere by a border decorated with the heads of men with long beards, and cherubim and human skulls in the southern hemisphere, representing the winds and cardinal points. In many parts of the world, Desceliers drew indigenous peoples with great precision, such as the Hottentots in South Africa and the Native Americans of North America.

In the 16th century, it was in Normandy that the most richly illustrated portolans were designed. Pierre Desceliers (1487-1574) is perhaps the most famous representative of the Dieppe school of mapmaking, and he is considered the father of French hydrography and cartography. Only two of his maps have survived. His manuscript world map from 1546 is now kept in the library of John Rylands University in Manchester (French MS 1*). The facsimile lithographed by Rembielinski in 1852 is rare: we have only found two copies in public collections, one at the BnF, the other at the National Library of Australia. 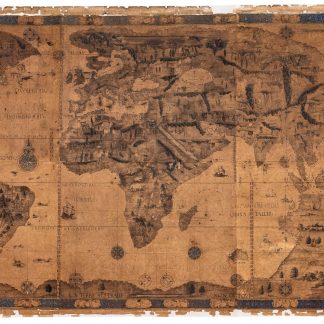