The most accurate map of Asia published at the beginning of the 19th century. It shows significant advancement compared with other maps of the period, incorporating the work of surveyors like James Rennell, to whom the map was dedicated. Rennell was surveyor-general of the East India Company's dominions in Bengal, and the information published in his "Bengal Atlas" in 1779 appears here. Arrowsmith also included remarkable topographical detail such as mountain ranges in regions as remote as Tibet. Remarkably the region on the shore of the Arabian Gulf is already labelled as "Bani Yas" territory. Arrowsmith has marked the track of Lapérouse's voyage in the Indian Ocean and Far East.

Aaron Arrowsmith (1750-1823) was the finest cartographer of his generation. Although he received little formal education, it is believed that he was provided with some mathematical instruction by William Emerson, an author of several books on the application of mathematics to the area of cartography. Around 1770, Arrowsmith moved to London to seek employment. It is believed that he worked for William Faden before joining John Cary Sr. in the early 1780s. There he provided the measurements for John Cary's early publication detailing the roads from London to Falmouth, his first signed work. Arrowsmith set up on his own in 1790 and over the next thirty years produced some of the most beautiful and elegant maps of the era. 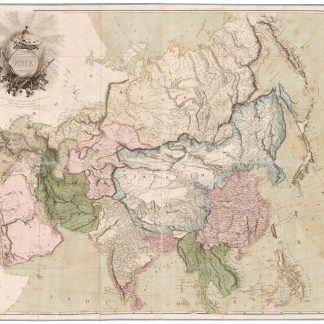