Lively report of an eventful flight taken by Sir Arnold Talbot Wilson (1884-1940), Civil Commissioner of Mesopotamia, aboard one of two RAF aircraft leaving Baghdad on 25 February 1919 bound for Cairo. Bad weather conditions and repeated engine trouble resulted in several emergency landings and delayed the journey, which Wilson eventually had to complete by train.

The first day of the trip involved heavy wind and a failing petrol pump causing the pilots Boyd, Nuttall and Lapraik to land and fix the pump near Tadmur before carrying on to Damascus, where they remained for three days of heavy rain. Upon continuing the journey on 28 February, one of the engines failed and the planes were forced to land in "difficult country". As repair seemed hopeless, Boyd decided to fly Wilson on to Ramleh and then return for Nuttall and Lapraik: "The taking off proved a difficult undertaking as the machine was firmly bogged, and the engine fall out would not move it. The Arabs however rendered enthusiastic assistance. About 200 of them surrounded the machine, and in spite of the fact that most of them pulled in different directions [...] after an hour's work and much shouting, succeeded in moving it to a comparatively firm piece of ground, from which it was possible to take off [...]".

When the aircraft got hopelessely bogged again near Tulkarm, Wilson continued his journey by train. In the meantime, Nuttall and Lapraik, who "were hospitably entertained by the Arabs", succeeded in a makeshift repair of the first plane's engine and picked up Boyd. The return flight to Baghdad with two substitute aircraft proved much smoother, involving only minor repairs and no emergency landings off the runway. The 500 mile distance between Damascus and Baghdad was completed in a non-stop flight of 4 hours 10 minutes "which probably constitutes a World's Record".

Slightly dampstained near right margins; a little foxed and creased. Traces of a rusty paper pin. A rare survival. 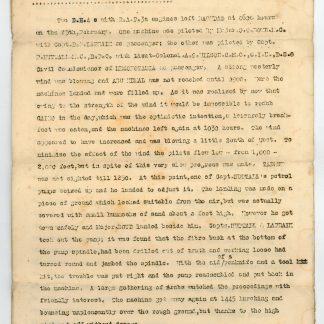