Clark, John Heaviside. Myriorama. A collection of many thousand landscapes [...].

A "myriorama", a term derived from the Greek words "myrias", meaning "multitude", and "orama", meaning "scene" or "view", comprised a set of illustrated cards, each representing a slice of a landscape. No matter what order you placed them in, the cards created a cohesive scene. The near-endless possibilities made it a popular entertainment for people of all ages. After the success of the first myriorama, designed by Jean-Pierre Brès in France, the toy took off across Europe from the 1820s, sparking imitations in Austria, England, Germany, and the Netherlands. Leigh and Clark adopted the name and the design of the box that housed the cards from the original French version, in hopes of inspiring other artists to draw attractive landscapes. Their myriorama also introduced the innovation of numbering each panel, making it possible to record and later recreate scenes found especially pleasing. Myrioramas provided dynamic visual entertainment at a time when the advent of cinema was still decades away. With their incredible number of possible combinations and charming visuals, myrioramas were "one of the most diversified and exhaustless inventions for variety and pleasing amusement that has hitherto appeared", according to the London's Morning Chronicle at the time.

The present 16-card myriorama can be arranged into an astounding 20,922,789,888,000 (that's 20 trillion!) different scenes. Later myrioramas with larger sets of cards could provide an unfathomable number of permutations, reaching well beyond our standard naming conventions.

Pencil ownership of Isabella Hord to the inside of upper cover. Box somewhat rubbed at extremities; corners lightly bumped; some brownstaining. The panels very well preserved. A copy is held at the Huntington Library in California. A charming item rarely seen at auction. 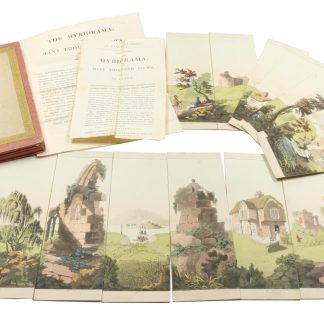