The inventor of the flying trapeze and of the "leotard"

Second edition. "Curious little book" (Guyaux) of memoirs by the famous French acrobat Léotard (1838-70), who invented the flying trapeze as well as the gym tights that became the ubiquitous wear of the dance class and were subsequently named after him. The first edition also appeared in 1860 and is identical in text. "Telling less of [Leotard's] art than of his good fortune" (ibid.), this interesting work includes a striking lithograph by Jean Émile Durandeau (1827-80), showing the artist clasping his trapeze in mid-air high above Paris, surrounded by drolleries of female figures also holding on to trapezes, one of them sticking out her tongue. The image suggests the "mixture of audacity and vanity which characterizes the tone of the whole work" (ibid.).

Born in Toulouse as the son of a gymnastics instructor, Léotard practised gymnastics from a young age and later joined the renowned Cirque Napoléon. In 1859 he invented the first flying trapeze known in the Western world. He built an act around his trapeze and played it for a decade throughout Europe, a performance attended by many famous personalities, including Charles Dickens, who wrote in a letter to the actor William Macready: "I have been beguiled into seeing Léotard, and it is at once the most fearful and most graceful thing I have ever seen" (11 June 1861).

Binding slightly worn. Paper somewhat waterstained near lower right corner and near the gutter; occasional foxing; small tear to the plate, not touching image. Rare in the trade. 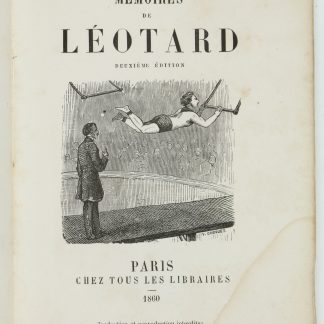