Rare second edition of Agostino Ricci's "De motu octavae sphaerae", edited by the French mathematician Oronce Finé, originally published in 1513 by Giolito in Trino. Discussing both spherical geometry and kabbalistic theories, the treatise denies the existence of a ninth heavenly sphere by refusing a presumed oscillation of equinoctials and the connected variation in the ecliptic. Ricci (Ricius) was a disciple of Abraham Zacuto, a Spanish Jew who moved to Portugal after the 1492 expulsion of Jewish people from Spain, and whose perpetual almanac was used for all navigational tables (including Vasco da Gama's ones) from its publication in 1496 until Nunez's tables of 1537.

This edition is an important work also for the history of typography. Colineus was one of the pioneers who introduced Italian Renaissance typography to France. This movement, which established many of the still-present typographical idioms, would culminate in the 1530s with books featuring the Roman types developed by Claude Garamond and other masters.

Issued without the "Epistola" mentioned on the title-page (as explained in the colophon). Annotated throughout in a rather rough contemporary hand with numerous underlinings and manicules. An excellent copy. 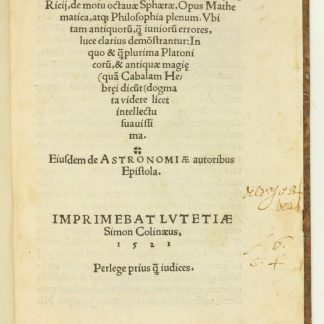