First edition. The inscription to the title-page reads: "To Ruth Ericsen, In remembrance of a long, hot summer. Irving S. Cohen". A very good copy published in the same year as the passing of the Civil Rights Act. Irving S. Cohen produced a work that sought to revise the teaching of American history in its wake. The purpose is clarified in the foreword: "Its basic aim is to promote a better understanding of America's past by developing an increased awareness of the history of American Negroes, their problems, and their accomplishments, both individually and as a group". Melissa Weiner discusses the importance of this bulletin which "represented a true departure from most books then available. It accurately depicted slavery's role in American development, Africa's diverse and advanced cultures prior to the slave trade, and acknowledged African American agency in attributing slave revolts to horrific treatment during slavery". The work concludes with a seven-page bibliography. 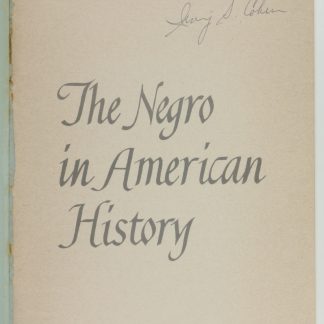