Interesting handwritten textbook of arithmetics with elaborate calligraphy by an otherwise unknown merchant named Pierre Clauzel from Lavelanet. The manuscript was probably executed in two phases, as pages 1-121 are rife with calligraphed titles, ornaments, borders, and marks in coloured ink, whereas the rest of the manuscript displays a plainer style in the same hand.

Clauzel signed both inner covers: the date added to the front, 3 December 1765, probably indicates the completion of the entire manuscript, despite the calligraphed title bearing the year 1764. According to the title, the textbook was compiled "under the direction of the Brothers of the Christian Schools of the town of Mirepoix". It is an introduction to arithmetics that does not go beyond basic operations, instead focusing on usefulness for merchants. Thus, the manuscript includes a wide variety of arithmetic operations for accounting, trade, financial transactions, etc., all demonstrated by aid of concrete examples. These varied and realistic practical specimens turn the manuscript into a valuable document for a history from below. For the "testament rule" Clauzet uses the example of a "merchant from Toulouse" who was attacked and "dangerously wounded" on the way to the "fair of Beaucaire". He wants to bequeath a certain sum to his pregnant wife and unborn child, with different portions of the sum being allotted either to a son or a daughter. The hypothetical wife ultimately gives birth two daughters and a son. Clauzet proposes a division rule to solve this unexpected problem. Another rule is a distribution key for a prize obtained by more than one ship, based on the number of sailors and cannons on board each ship. The manuscript closes with several examples for bills of exchange and copies of seven requests for payment by Pierre Clauzel. The two folding plates compare various measures of weight and length from France and other parts of Europe.

The congregation of the Institute of the Brothers of the Christian Schools, also known as De La Salle Brothers, had been established by Jean-Baptiste de la Salle in Paris in 1694 with the goal of providing education to poor children. The chapter and school in Mirepoix had only been recently established when the manuscript was written. 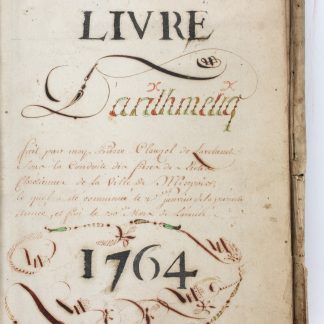