Detailed British Admiralty chart of the approaches to Jeddah, present-day Saudi Arabia, with an inset chart of Jeddah Harbour and the city itself.

This is undoubtedly one of the better antiquarian maps of the gateway city to Mecca and Medina. Jeddah was an important diplomatic city when the map was made; illustrated are the consulates of Britain, Russia, Austria, the Netherlands, Egypt, and France. Numerous minarets of the old city are shown. The old city walls and the gates of Mecca, Cherif, and Medina are labeled. The Ummina Howwa (Eve's Tomb) is shown.

At the beginning of the 20th century, Jeddah was an important Red Sea port, but with many islands and much shoaling in the approaches, it was a dangerous one. The British Admiralty has produced nautical charts since 1795 under the auspices of the United Kingdom Hydrographic Office (HO). Its main task was to provide the Royal Navy with navigational products and service, but since 1821 it has also sold charts to the public. In 1795, King George III appointed Alexander Dalrymple, a pedantic geographer, to consolidate, catalogue, and improve the Royal Navy’s charts. He produced the first chart as the Hydrographer to the Admiralty in 1802. Dalrymple, known for his sticky personality, served until his death in 1808, when he was succeeded by Captain Thomas Hurd. The HO has been run by naval officers ever since. Hurd professionalized the office and increased its efficiency. He was succeeded by the Arctic explorer Captain William Parry in 1823. By 1825, the HO was offering over 700 charts and views for sale. Under Parry, the HO also began to participate in exploratory expeditions. The first was a joint French-Spanish-British trip to the South Atlantic, a voyage organized in part by the Royal Society of London. In 1829, Rear-Admiral Sir Francis Beaufort was appointed Hydrographer Royal. Under his management, the HO introduced the wind force scale named for him, as well as began issuing official tide tables (1833). It was under Beaufort that HMS Beagle completed several surveying missions, including its most famous voyage commanded by Captain FitzRoy with Charles Darwin onboard. When Beaufort retired in 1855, the HO had nearly two thousand charts in its catalogue. Later in the 19th century, the HO supported the Challenger expedition, which is credited with helping to found the discipline of oceanography. The HO participated in the International Meridian Conference which decided on the Greenwich Meridian as the Prime Meridian. Regulation and standardization of oceanic and navigational measures continued into the 20th century, with the HO participating at the first International Hydrographic Organization meeting in 1921. During World War II, the HO chart making facility moved to Taunton, the first purpose-built building it ever inhabited. In 1953, the first purpose-built survey ship went to sea, the HMS Vidal. Today, there is an entire class of survey vessels that make up the Royal Navy’s Hydrographic Squadron. The HO began to computerize their charts in the late 1960s and early 1970s. In 1968, the compilation staff also came to Taunton, and the HO continues to work from there today. 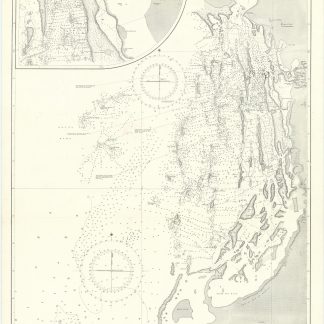