Signed by Peake Pasha, Creator of the Arab Legion

Transjordan, for the Government of Transjordan by the Crown Agents for the Colonies, [1931].

"The law of Transjordan is Turkish law as it existed on the 23rd of September, 1918, except in so far as it has been superseded or modified since that date. To indicate the extent to which it has been so superseded and modified is the purpose of this volume […]" (from the Compiler's Preface).

Endpapers lightly foxed, otherwise very good in the original buckram, labels a little rubbed and lifting at the corners. 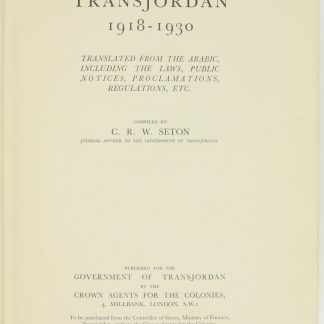