Striking and well-preserved example of a so-called "dressed print", based on a devotional engraving of Mary Magdalene by the German engraver and publisher Martin Engelbrecht (1684-1756), dating to the mid-18th century. The materials and style of the adornments point to the 18th century, though a later reuse of older fabrics cannot be ruled out. As often, the dressing has been ingeniously applied both under and over the surface of the original engraving. The penitent Mary Magdalene has been modified by being pasted onto glazed paper, producing a dramatic black-sky background, her body is embellished with three different brocade fabrics (two with metallic threads), and the print was further enhanced with hand-colouring, some metallic lace and ground glass. The saint is characterized by her traditional attributes of a cross, a book, a myrrh jar, a straw mat, and a skull, while her left foot rests on a globe or orb. The precious clothes that were added to Mary Magdalene, who is usually just covered by her long open hair as an expression of her ascetism and atonement, almost transforms her into a celestial Mary, thus altering the meaning of the engraving.

The fashion for dressing prints existed probably from the beginning of printed illustrations themselves, though it was a widespread, predominantly female recreation, especially in nunneries and convents, during the 17th and 18th centuries. Dressed prints were often overlooked by art historians and, due to their fragile nature, are rarely preserved in such good condition. 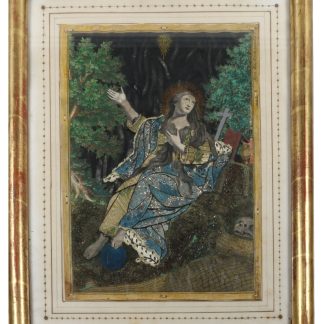