First edition. Lenin's popular commentary on Russia's political landscape in the form of questions and answers. Drafted within weeks of the February Revolution, it explains the positions of the major political parties regarding the burning issues of the day. It was originally planned as a leaflet, owing to the fact that the Cadets, Socialist Revolutionaries and Mensheviks were making wide use of leaflets in their propaganda and pasted them up all over town. Lenin believed that a Bolshevik leaflet explaining what every party was and what it stood for should be pasted alongside the anti-Bolshevik proclamations. However, the article turned out to be too long to be issued as a leaflet, and was first published in the Helsingfors Bolshevik newspaper "Volna", then issued in pamphlet form by the Zhizn i Znaniye publishers in 50,000 copies. The proprietors of the printing-press, who sympathised with the Cadets, held up publication, but with the help of the workers' committee the pamphlet was issued on 4 July 1917. Owing to the July events, however, it was hidden away in the publishers' warehouse. A few days later it began to circulate in the working-class quarters. The first edition sold out quickly and a reprint was put out. A second edition was published in Moscow in 1918 with a foreword by Lenin. 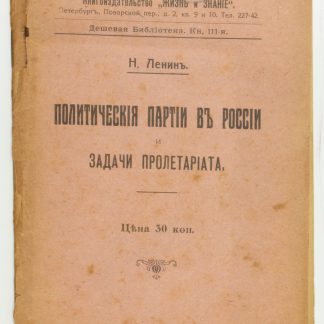