Only known specimen of an anonymous copy after Georg Daniel Heumann’s monumental 1735 copper print engraving based on a design by Salomon Kleiner, with additional portraits of Empress Maria Theresa and the later Emperor Joseph II and his wife. This faithful, though qualitatively inferior copy was probably made on the occasion of the wedding of Archduke Joseph of Austria and Princess Isabella of Parma on 6 October 1760 in Vienna. The couple is shown in a double portrait presented by a crowned eagle flying on the right side of the tower. They are opposed by a similarly presented profile portrait of Maria Theresa on the left side. Superimposed, the two medallion-bearing eagles would form the double-headed Habsburg eagle.

Joseph's first and happiest marriage lasted only three years, as Isabella died of smallpox on 27 November 1763 at the age of 21, leaving behind a devastated widower. 1763 is thus the latest possible date for the creation of this beautiful etching.

Good impression with some minor stains and a larger brown stain to the upper left margin. 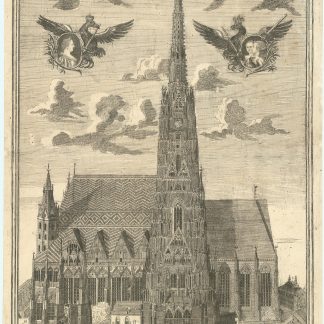