To the German-American romanist Konrad Ferdinand Bieber (1916-2006), thanking him for an article that Camus will "send to [his] editor" as they are starting a "revision of the translation", in all likelihood of the 1954 English edition of "The Rebel". Camus also expresses his regret that he failed to meet Bieber in Paris during the summer because he "quits Paris more and more often to be able to work" and asks him to announce his next visit in advance so they can arrange a meeting. In a short postscript, Camus informs Bieber that his preface to Bieber's book "has led to a brief polemic" that he will send him in order to give him an idea "of the pleasures of being a French writer".

Although Camus does not name any of the texts referenced in the letter, they are easily identified. In May 1955, Bieber published his article "The Translator - Friend or foe?" on the mixed reception of Camus's "The Rebel" in Anthony Bower's translation. Bieber's book "L'Allemagne vue par les écrivains de la Résistance française" with a preface by Camus was published in Geneva and Lille in 1954.

On stationery of Camus's publisher "Librairie Gallimard". The year "55" marked in ballpoint, probably by the recipient. Well preserved. 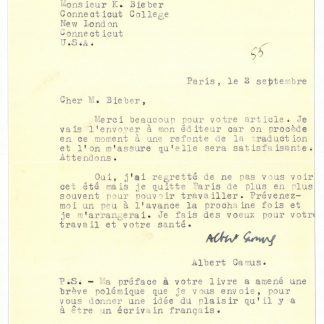