The final version of Celan's most famous poem "Todesfuge" ahead of its publication in his 1952 poetry collection "Mohn und Gedächtnis", with the famous opening line, "Schwarze Milch der Frühe wir trinken sie abends".

According to his own account, Celan wrote the poem in Bucharest in 1945, though some sources state that he had already started in 1944, just after he had been liberated from a forced labour camp. "Todesfuge" was first published in a Romanian translation by Celan's close friend Petre Solomon as "Tangoul mortii" in 1947. The first publication of the German original followed in 1948 in Vienna, as part of Celan's first volume of poetry, "Der Sand aus den Urnen". As the small edition contained many misprints, it was withdrawn by the author and most copies were destroyed. The publication in "Mohn und Gedächtnis" can thus be considered the first authorized publication of Paul Celan's "Todesfuge".

Celan presented this typescript as a gift to Diet Kloos-Barendregt some time between August 1949 and July 1950. Kloos-Barendregt (1924-2015) was a Dutch singer and resistance fighter whose husband had been executed by the Nazis in 1945. During a brief stay in Paris she met Paul Celan by chance at the Café Dupont in August 1949. They immediately formed a connection over their traumatic experiences and losses and began a romantic relationship. 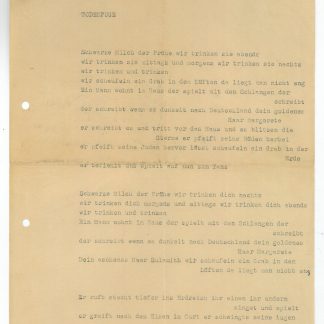