"Soliani works so slowly that I cannot say when it will appear": Lodovico Antonio Muratori's scientific network

Highly interesting letter to the curator of a museum of antiquities, concerning inscriptions from a "glorious collection of marbles" and other research-related issues. Muratori thanks the recipient for copies of inscriptions, writing enthusiastically that some were unknown to him and scolding himself for wrongly believing that he already knew the entirety of the collection: "Ho più volte fatto un rimprovero a me stesso, perché sapendo cotesta gloriosa unione di marmi, io sia stato si trascurato di non cercarne conto coll'immaginarmi d'averle già in mano." Therefore, Muratori announces that he will again name the recipient as he had before in his "Antiquitates italicæ medii ævi".

In the second part of the letter, Muratori answers several questions of the recipient. He has performed fruitless research on a Niccolò Bendedei in the archives of the chambers of Modena ("Libri Camerali") but still hopes to find his name in the lists of salaried magistrates ("nel ruolo dei salariati"). Niccolò Bendedei was a ducal secretary of the late 15th century. Muratori continues to advise the recipient that the book he had asked for was not Pellegrino Rossi's "Vita di San Geminiano" (Modena, 1736), but rather a criticism of Rossi's book that had been banned from sale. Nevertheless, he promises to send the recipient a copy, if he can "obtain one under the cloak", although he is sceptical whether this will be possible: "Appena se ne vide copia qui che fu proibite ai Libri il tenerne e venderne. Se mi riuscirà di poterne aver una sotto il mantello ella sarà servita. Ma non so se mi verrà fatto. Né pur` io ne ho copia".

Finally, Muratori confirms that the second volume of his "Delle Antichità Estensi Ed Italiane" is "already under the printing press", complaining about the tardiness of his publisher Bartolomeo Soliani: "but this publisher Soliani works so slowly that I cannot say when it will appear". The recipient will be "among the first to have it". Effectively, Muratori's book was only published in 1740.

Two corners reinforced with paper, some stains and browning. 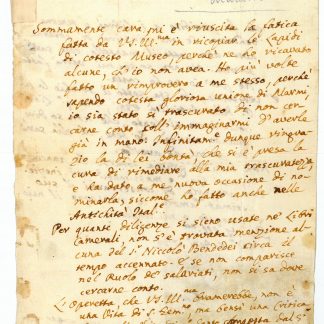