Unpublished source on Oman navigation: illustrated logbook recording the laying of the telegraph sea cable off the Omani coast in 1859

Historically significant manuscript logbook, containing a detailed record of the first attempt at laying a submarine telegraph cable to connect London with British India. The expedition took place from May 1859 (the Red Sea leg from Suez to Aden) to February 1860 (from Aden to the Khuriya-Muriya Islands, Muscat and Karachi). The two specially designed cable ships, Imperador and Imperatrix, were supported by HMS Cyclops, which surveyed the coastlines and reported on the depth and structure of the ocean floor.

The entries from February 1859 to May 1860, documenting the ship's Red Sea and Arabian Sea mission, span over 200 pages. We first find the Cyclops near Cape Ras al Hadd on the eastern coast of Oman, at the entrance to the Gulf of Oman: "Cape Ras al Hadd ... terminates in a low sandy spit at the head of which is a village and mud fort. There is an inlet about 4 miles to the northward of the cape, but inaccessible to large vessels. There is a heavy surf on the beach during northerly winds" (9 February 1859). The ship then plied in the Red and Arabian Seas between Egypt, Yemen and Oman, eventually finishing in Bombay.

During its expedition, the Cyclops visited and moored in Quseer and Zabardag Island (Egypt), Suakin (Sudan), Perim Island (Strait Bab-el-Mandeb, Yemen), the Hanish Islands (Yemen), Palinurus Shoal and Cape Fartak (Yemen), Al-Hallaniyah and Al-Qibliyah (Khuriya Muriya Islands, Oman), Ras Madrakah and Ras Al Hadd (Oman), Charna Island and Karachi (Pakistan). The logbook entries record the conducting of soundings and the laying of cable, along with quotidian ship activity. Brief entries touch on the death of crew members; discharging coal; punishing men for wrongdoings; maintenance of the ship; making notes of other ships in company; visits on board by local notables, etc. Six larger entries, occupying up to two pages of text, describe the topography, landmarks, soundings and economy of Karachi, Zabargad Island, and Muscat Cove, which latter harbour is said to be "formed by Muscat Island on the east and Ras Muscat on the West, it is one mile deep by half a mile wide with 12 fms at entrance, decreasing to 3 fathoms ahead of the town. It is defended by two ... batteries on the island, one on the height to the seat of town and two on Ras Muscat. They are all in a stay of decay. The entrance to the cove is difficult to make out when coming from the eastward ... The exports of Muscat are wheat, dried fish, dates and cattle, the imports being European and Indian manufactured goods, sugar, etc. The revenue is about £100,000. The Imaum's Palace faces the water, his army generally consists of from 10 to 12,000 men, and the fleet of 2 frigates, 2 corvettes, a transport and brig, the greater part of the Navy having been removed to Zanzibar, the Captains of these vessels being educated at Bombay or Calcutta. Supplies of all kind are cheap and plentiful. Boats may be hired thro' the medium of the Agent of the Indian Government for the shipment of coals" (26 November 1859).

Illustrated with eight well-executed ink-drawn charts, showing the tracks of Cyclops in the Red and Arabian Seas, as well as the harbours of Muscat Cove and other places. Five beautiful ink sketches show the city of Muscat, "Hallani Bluff from Addington Cove" (Al-Hallaniyah, the largest of the Khuriya Muriya Islands, Oman), Ras Fartak (Yemen), Karachi harbour, and Colombo.

Lightly armoured and laid with too little slack, the cable soon failed: indeed, the 1859 section had already broken down by the time the route was completed in 1860. Messages were passed over individual sections, but the entire cable never worked as a unit. Communication to India would not be established until the 1864 Persian Gulf cable was laid. The captain of the Cyclops, William Pullen (1813-87), was a noted British navigator and Arctic explorer who took part in John Franklin's search and in 1849 became the first European to sail along the north coast of Alaska from the Bering Strait to the Mackenzie River in Canada.

A final part of log, comprising some additional ca. 150 pp. (May 1860-May 1861), covers the Cyclops's survey of the south-eastern coast of Ceylon and her return voyage to England. Overall, an important content-rich source on the early history of the submarine telegraph cable around the Arabian Peninsula to British India. 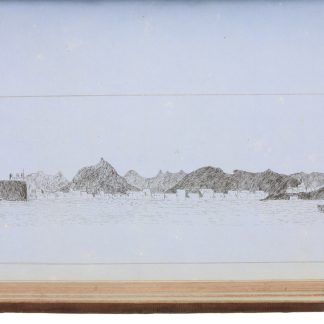