To Ada, Countess of Lovelace, Lord Byron's daughter, declining an invitation: "I have an engagement on the 22d otherwise I should have had much pleasure in dining with you that day".

Although self-taught, Mary Somerville had by the mid-1820s established herself as a significant figure in London scientific circles. In 1831 she published "The Mechanism of the Heavens", a condensation of Laplace's "Mécanique céleste", and the first in what was to be an immensely successful and influential series of scientific text-books which were to make her arguably the most widely recognised woman of science before Marie Curie. Somerville was not only a friend but an early intellectual influence on Ada Lovelace, and it was most likely she who introduced the then Ada Byron to Charles Babbage in 1833, when she was seventeen.

Traces of folding and left margin with punched holes (not touching text), otherwise in fine condition. 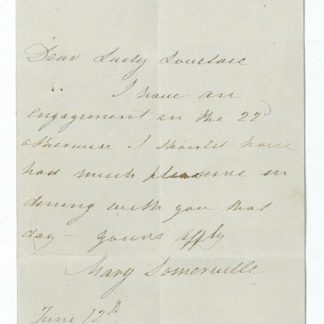