Complete manuscript for "Das stille Lied" for a male vocal quartet (two tenors and two basses), written a year before Schubert's death, between completing the first and the second part of the "Winterreise". A little-known song of great and simple beauty, this is the setting of a text by the German theologian and poet Johann Georg Seegemund (Pseud. Gottwalt, 1794-1877), "Schweige nur, Süßer Mund der heil'gen Liebe": "Hush, now, sweet mouth of sacred love. Bustling nature weaves silently in the earth’s womb, and silent is the heaven's vastness. Every trace of life is silent, love lives only cloaked, stay silent now ..." (transl. by Matthew Harris). Schubert wrote the music for the poem's three stanzas consecutively, with the words inserted between the first two staves. Signed in the upper right corner of the first page.

This is the only known complete score of this song. Although Wurzbach in 1876 asserted that the autograph was in the Haslinger archive in Vienna, its whereabouts were unknown during most of the 20th century. Correspondence included with the present lot shows that in 1881 it was in the stock of the Leipzig antiquarian book and manuscript concern Otto August Schulz, who offered it to the Geneva-based American collector Ephraim Leonard Corning (1836-1924), long the U.S. Vice Consul at Zurich, for 500 German Marks. After that, its traces disappear for nearly a century. Indeed, the Lied was long considered incomplete, as only a fragmentary sketch was known to scholarship: a single-page draft comprising merely the first tenor's voice of the first verse, that had survived in Vienna's Municipal Library (shelfmark MHc-185). The Viennese musicologist Fritz Racek completed that sketch and published it in 1961; it was subsequently published in its fragmentary state in 1974 within the Neue Schubert-Ausgabe (Series III, vol. 4). Only in 1977 was the present complete manuscript rediscovered when it surfaced at the French auction house Laurin, where it sold for 113,500 Francs (today roughly 100,000 Euros). In the following year, the present complete version was issued by Bärenreiter Verlag.

Very light duststaining and fraying to the untrimmed edges; traces of a vertical fold, but very finely preserved altogether. 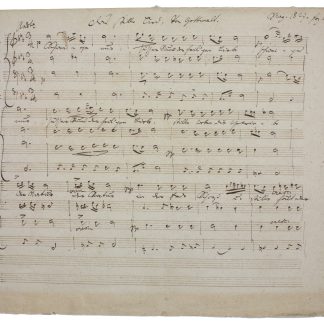