Portrait postcard, signed in ink "Chung Ling Soo", with Chinese characters adjacent, depicting the magician head and shoulders, his head shaved and wearing a queue, in an embroidered jacket. This image was also used as the frontispiece for the programme for the Alhambra Theatre, Paris, in September 1912.

W. E. Robinson was an American illusionist famous for creating the persona of a Chinese magician, Chung Ling Soo, an act he performed both on and off the stage. Dressed in traditional Chinese attire, he shaved his head, wore his hair in a queue and created an elaborate "back story" for himself. He never spoke onstage unless in broken English and communicated to journalists via an interpreter. He became highly popular and one of the highest-paid vaudeville performers, helped no doubt by the publicity resulting from his feud with a real Chinese magician, Ching Ling Foo, who claimed he had stolen his act. Soo was most famous for his "Condemned to Death by the Boxers" trick and was fatally injured by a bullet during a performance of the act at Wood Green Empire in 1918. After his death, the public was shocked to learn that he was not Chinese. 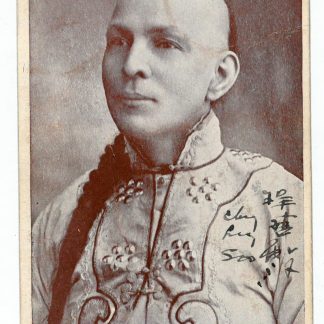