To the engineer J. Thorne with thanks for his letter of condolence: "I am grateful to you for your friendly expressions of sympathy with reference to the recent most distressing calamity. Colonel Lyre [...] especially was a very very old Friend & Colleague, & all these Officers were endeared to us all. With many thanks I remain [...]".

Abel, in collaboration with Sir James Dewar, invented cordite (1889), which was adopted as the standard explosive of the British Army. He also carried out studies relating to dust explosions in coal mines and in the process developed a device for testing the flashpoint of petroleum. Abel also found a way to prevent the spontaneous explosion of gun cotton. From 1854 to 1888 he served as Ordnance Chemist at the Chemical Establishment of the Royal Arsenal, where he established himself as the leading British authority on explosives.

On stationery with blindstamped arms. Small cut from breaking the seal; small tear in the upper centerfold. Somewhat toned. 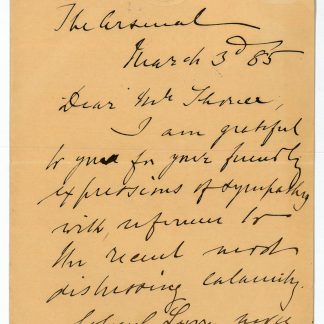