The original Joint Venture Agreement between the state-owned Iraqi Drilling Company (IDC) and the Mesopotamia Petroleum Company (MPC), with the autograph signatures of Idriss Muhsen Al-Yassiri, General Director of IDC, Stephen Remp, Director of MPC and its associate Ramco Energy, and Peter Redman, Director of Midmar Energy and Firstdrill, other associate companies of MPC.

This joint venture, known as the Iraqi Oil Services Company LLC (IOSCO), was created with the objective of drilling 60 new wells each year in the Republic of Iraq, thus significantly increasing oil and gas production. This groundbreaking deal was the first joint venture of its kind between the Iraqi Ministry of Oil and a foreign oil company since the fall of the regime of Saddam Hussein in 2003. On 7 July 2009, IDC terminated the agreement after MPC failed to fulfil financial obligations. MPC was unable to confirm funding of $44.1 million to meet the initial capital commitments to preserve its 49 percent stake in the venture.

Handwritten addition by Stephen Remp on fol. 4 specifying the territory of the joint venture: "(i.e. Missan Province or any other Provinces to be mutually agreed by The Parties.) [...]". 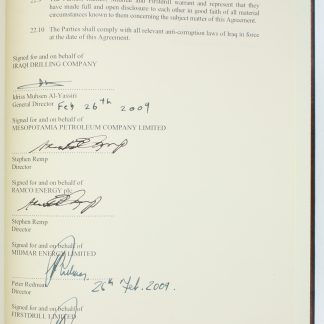