The first Chinese Qur'an on the market written by a woman

A finely illuminated Qur'an Juz' (one of the thirty parts of equal length into which the Qur'an can be divided), written in China in the early 17th century CE, by a woman who identifies herself as descended from the powerful Hejaz-based tribe of the Quraysh, historical stewards of Mecca.

The colophon reads (in Arabic): "This blessed juz' (part) was completed by its writer, Amat Allah (the maidservant of Allah) Zubaidah bint Abdullah Al-Qurashiyah (i.e., Zubaidah, daughter of Abdullah of Quraysh), of Chinese birth and residence, in the place of Khanbaliq, one of the Chinese cities graced by Islam, on the 17th day of the month of Muharram in the year 1033 Hijri".

The Quraysh tribe historically inhabited and controlled the city of Mecca and its Kaaba, and the Prophet Muhammad was himself a Qurayshi from the Banu Hashim. When Muhammad entered Mecca victoriously in 630, the Quraysh embraced Islam, and a hadith holding that the caliph must be from Quraysh became almost universally accepted by Muslims. "Khanbaliq" ("the City of the Khan") was the traditional Mongolian name of the city which in 1623 had already borne the new name "Beijing" ("Northern Capital") for more than two hundred years. In the colophon, the scribe confirms that the religion of Islam was well-established in Beijing at that time. Indeed, Arab presence in China dates back as far as the first Caliphate: the Prophet's companion Sa'd ibn Abi Waqqas, himself a Qurayshi, is traditionally credited with introducing Islam to China as ambassador in 650. Another prominent member of the tribe who visited China is Ibn Wahb al-Qurayshi, who is mentioned by Abu Zayd al-Hasan al-Sirafi in his well-known travel account written in the first half of the 10th century.

The present text is that of Juz' 20, comprising surah 27 (Al-Naml - The Ant), verses 60-93, surah 28 (Al-Qasas - The Story), which focuses on the life of the Prophet Moses, and surah 29 (Al-'Ankabut - The Spider), verses 1-44. The colophon in encircled with gold writing on green background, quoting the Qur'an, surah 6, verse 115: "The word of your Lord has been perfected in truth and in justice. None can alter His Words, and He is the All-Hearing, All-Knowing". Margins overall clean with minor annotations; some stains and insignificant rubbing as well as a few smudges. Overall in fine condition.

Qur'an manuscripts written by women are generally considered rare, and only a very few examples have appeared at auctions internationally. This is first Chinese Qur'an written by a woman that we could trace on the market. 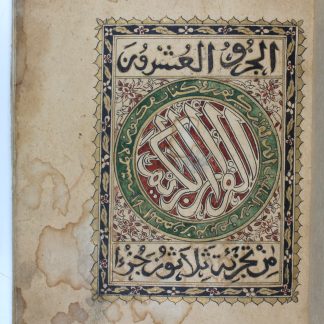