Including a treatise on the philosopher's stone

A German alchemical manuscript comprising five treatises in five different hands. The first part is an anonymous essay on the medical aspects of human excrement ("Auß den Microcosmischen excrementis oder Stercore humano können Medicamenta gemacht werden [...]"); the second, also anonymous, is a brief treatise on the Philosopher's Stone ("Meine meinung den Lapidem Philosophorum zu erlangen ist diese [...]"). Part three is a commentary on the 1660 Amsterdam edition of Joachim Poleman's "Novum Lumen Medicum". Poleman was an adherent to the ideas of Johann Baptista van Helmont (1579-1644) and Ramon Lull. The "Novum Lumen Medicum" is Poleman's elucidation of Helmont's teachings on the secret of philosophers' sulphur, which involved bloodstone, spirit of wine, and "alzali" (alkali?) to produce a sulphuric tincture. First published in 165m the book enjoyed considerable success in many later editions and translations.

The fourth section is a commentary on Johann Gottfried Jugel's "Prima Materia Metallorum", first published 1754. It is one of several works on metals and chemistry by Jugel, and discusses the properties of various substances. The final section presents material from a work attributed to Herward von Forchenbrunn and to Jospeh Kirchweger (d. 1746) titled "Aurea Catena Homeri", which concerns sulphurs and metals and their various medicinal applications. The attempt to distinguish and separate true applicable science and medicine from the traditional occult arts is strongly indicated in the contents of this manuscript.

Browned throughout due to paper stock; some foxing, but well legible throughout. A late 19th century label mounted on the first leaf lists some of the contents. Attractively bound. 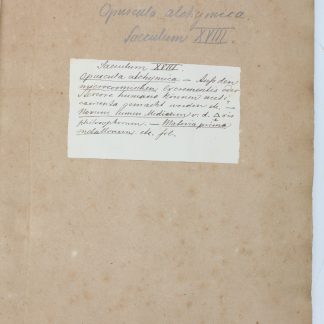