The French essential standard sailing directions for the Red Sea and Gulf of Aden as well as the entire south coast of the Arabian Peninsula. Comprises directions for the navigation of the Suez Canal, the Gulf of Suez, and the central track for steam vessels through the Red Sea, Straits of Bab-al-Mandab, and Gulf of Aden; also, descriptions of the Gulf of 'Aqaba, the shores of the Red Sea, the inner channels, the Gulf of Aden, and the south-eastern coast of Arabia to Ras al Hadd, the coast of Africa from Ras Si Ane to Capo Guardafui, including the Gulf of Tadjoura, thence to Ras Hafun, Abd-al-Kuri, the Brothers, and Socotra.

Largely based on the relevant British counterpart, the "Red Sea and Gulf of Aden Pilot"; the section on the Gulf of Tadjoura is entirely by the lieutenants of the French hydrographic ships Guillou and R. de Carfort. The book had appeared only once previously, in 1885, and the present copy includes not only the Supplements I and II published in 1900, but also extensive publisher's corrections that were issued to slips of paper and are here bound into the volume in their respective place. The flags and signals are partly printed in red and yellow. A rare and early edition in excellent condition. 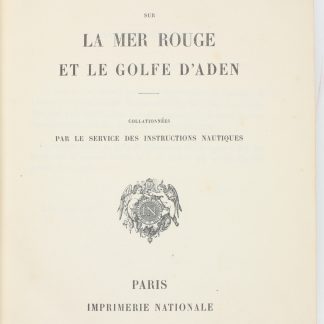