Signed by the surveyor

Collingwood, William. Trigonometrical Survey of a part of Mesopotamia. From Hillah to the Ruins of Niffer with the rivers Euphrates and Tigris.

Some paper defects and edge damage restored. Rare; copies are known in no more than two public collections (Bodleian; British Library). Personal copy of the cartographer William Collingwood, signed by himself as well as by Cdr. W. B. Selby, R.I.N.

Selby began his distinguished surveying career in 1837 when, as a midshipman, he embarked on the expedition first to lay navigation buoys in the mouths of the Indus River and then to chart some coastal areas in the Horn of Africa. By 1846 he was back working off the mouth of the Indus, having made his reputation in Mesopotamia (in 1840-41), and thereafter achieved considerable acclaim for his numerous other surveys, including those during the military expedition to Persia in 1856, before returning to England at the end of 1862. He was succeeded as Surveyor of Mesopotamia by his protégé, Lt. William Collingwood (a distant cousin of the Admiral), who had already done much valuable work in the region, including the large-scale, though surreptitious, mapping of Baghdad in 1855, described by him as follows: "The survey of the city of Baghdad was completed entirely by myself and under very unpleasant restrictions [...] The Turkish Government were not to know anything about it [...] and I was left to survey the town as best I could, and under such difficulties that at times I had to note bearings and paces all over my white shirt, where best I could get the pencil at the time [...]". During this same expedition, Collingwood also surveyed the Shatt-ul-Arab, the city of Bussorah (also by stealth) and much of the country between the Tigris and Euphrates Rivers, and he was undoubtedly one of the most gifted and productive R.I.N. surveyors of his day. 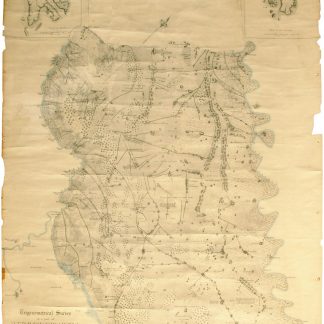 Sie sehen: Collingwood, William. Trigonometrical Survey of a part of Mesopotamia. From Hillah to the Ruins …London, 1862. € 2.500,00
In den Warenkorb